A Fate Worse than Death

Letitia Meynell explains why assisted dying is an important option for the terminally ill.

I have long thought that physician-assisted death ought to be allowed in any compassionate society. However, watching my mother die from pancreatic cancer last year left me feeling that not allowing terminally ill Canadians the right to an assisted death is obscene. I recognize that many people worry that legalizing assisted death will make members of our society more callous. I suspect that this view depends on thinking about dying in the abstract, instead of looking at the real experiences that people go through when they get so very ill that they die.

Having watched my mother waste away and witnessed her suffering in the last days of her life, I have little patience for sanitized accounts of death that portray it as courageous, peaceful, or beautiful. For many of us, though thankfully not all, our last waking moments, days and sometimes months will be humiliating, excruciating, and terrifying. 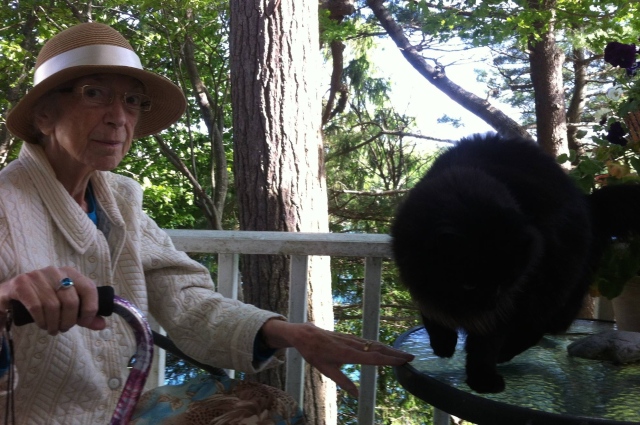 Dr. Jenifer Meynell (my mum) a couple of weeks before she died, sitting on our deck before one of her last outings.

I suppose that there are some who think that there really is no fate worse than death. While this strikes me as displaying an extraordinary lack of imagination, there is, I expect, little I could say to change their minds. I do not see, however, why they should get to impose their value system on people like my mother who would have been better off dead for the last few days of her life. More importantly, she would have been given peace of mind throughout her illness from knowing that she had the option of an assisted death when she found her continued existence unbearable.

Mum was not afraid to die. When she received her terminal diagnosis in October 2013 she took it with the attitude “well, that’s that” and she comforted me while I wept beside her. She decided that she wanted to die at home and in her own bed and although in the end that’s just what she did, it was an ongoing worry of hers and ours that as her disease progressed this would become impossible.

Though she was not afraid of death she was afraid of pain and afraid of what would happen to her as she, in her words, “rotted apart.” While she made the most of the life she had left—literally stopping to smell the flowers throughout the spring that she knew would be her last—she sometimes talked about how she might kill herself. She made sure I knew about the poisonous yew tree down the street and noted, as she grew weaker, that she would no longer be able to drag herself down to the lake by which we live to drown herself. She told me she hoped I would kill her if it got too bad and she couldn’t do it herself.

Having watched my mother go through this, I’m struck by the profound callousness of those who would deny terminally ill Canadians the right to choose physician-assisted death. The terminally ill have a lot to cope with. They have to get their affairs in order; they have to say their good byes to the people and places that they love. They worry about the people that they’re leaving and often end up comforting them. Each has a disease with its various pains and indignities, which will get worse and worse before eventually killing them.

For the terminally ill their journey is already difficult enough. Complete and compassionate care means doing everything we can to help them and sometimes that means helping them die.

Letitia Meynell is an Associate Professor in the Department of Philosophy at Dalhousie University.

Author’s Note: Much of this piece repeats (sometimes verbatim) a blog that I wrote for Impact Ethics a couple of weeks before my mother died. When CBC’s Information Morning asked if I would read that piece for their “Commentary” segment I realized that I couldn’t just present it as if Mum were still alive, so this is what resulted.

← Pink Pill or Blue Pill?
GET OUT OF THE WAY to PAVE THE WAY →