In August 2007, Patti Tomasson adopted two children. As a new parent, she received standard parental leave benefits: 55% of her insurable earnings for a maximum of 35 weeks. At the time, Tomasson also applied for an additional 15 weeks of maternity benefits. This application was denied by the Canada Employment Insurance Commission on the grounds that these benefits are only for biological mothers.

So, Canadian courts have not viewed the unequal leave time available to adoptive and biological parents as discriminatory, on the grounds that biological mothers have the unique need to physically heal from childbearing. However, to acknowledge this unique need of biological mothers, while failing to recognize the many unique needs that accompany adoption, is discriminatory. (While adoption is the focus of this commentary, my claims apply equally well to permanent kinship or customary care.) 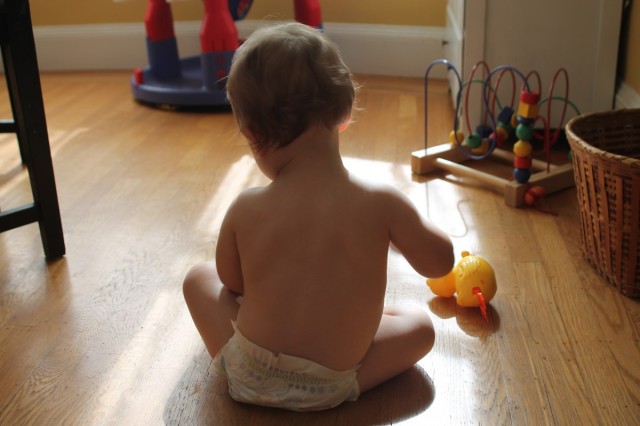 Image description: Photo of a baby wearing a diaper sitting on laminate wood floor. Baby is playing with toys and their back is facing the camera.

Legal scholar Sophia Moreau defines discrimination as a setting back of one’s interest in being able to live the life of one’s choosing free of constraints imposed by irrelevant features of one’s identity (2010). Those irrelevant features include—among others—one’s race, gender, dis/ability status or, in this case, family status. Importantly, family status is a legally recognized ground for discrimination in Canada (see Canadian Human Rights Commission).

The current parental leave benefits structure does not treat the decision to grow one’s family through adoption equally as the decision to do so biologically. Thus, through this structure, the federal government treats these families differently based on the ways in which they have chosen to grow their families.

This is an instance of legal discrimination on Moreau’s definition, since it amounts to a setting back of one’s interest in living a life of one’s choosing, and having those choices supported equally by the government, regardless of family status. The importance of having the government treat equally the choices people make about how to grow their families becomes even more apparent when considering the many unique challenges that do arise for people who adopt children.

Building a family through adoption can present families with several obstacles: new routines must be established at home and elsewhere, new relationships must be fostered and new bonds or attachments formed. Forming healthy attachments between primary caregivers and their children is crucial for the long-term mental wellbeing of children, and also for the stability of their current and future intimate relationships. When adoptive parents and their children are unable to form healthy attachments, the relationship is more likely to break down, which can lead to children potentially being removed from their adoptive homes and returned to state care.

While settling a new child into one’s home is challenging for everyone, this process is especially difficult when the child or youth comes from a previous home or environment and is now having to adjust to an entirely new one. These challenges are also exacerbated when the child or youth has experienced trauma, particularly the kind that fragments one’s sense of security or ability to easily place trust in adults.

The legal discrimination in the parental leave benefits system has tangible consequences: adoptive parents are eligible for less leave time, and thus have a shorter window of opportunity to bond with their children and for their children to attach to them. This can jeopardize the likelihood that the placement will be permanent, putting the child at risk for long term instability.

In addition to these material consequences, by failing to recognize the distinct challenges faced by those who decide to form their family through adoption, and their significance for the long-term wellbeing of adoptive children and their families, the Canadian government sends a message that these families are not as important, or are second best to biological families.

Heather Stewart is a Ph.D. Candidate in the Department of Philosophy at Western University.