Abraham (Rami) Rudnick provides a cursory overview of multiple sources of moral distress in mental health care and recommends addressing its root causes for the longer term and broadening the scope of ethics consultations and other support to address it for the short to medium term.

Lately, mental health issues seem to be a priority in Canada and elsewhere. A few examples of this positive change are anti-stigma campaigns, housing support initiatives, youth focused projects and public funding for evidence-based psychotherapy. For example, the World Suicide Prevention day was observed last month, a bit more than a decade after it was initiated on September 10, 2003.

Yet within current mental health services, there are still many examples of clinical care that are not sufficiently person-based, evidence-informed and/or socially responsible, such as work rehabilitation, which pays less than minimal wage to service users, and group homes (sheltered – segregated and dependence promoting – housing) rather than supportive – integrated and independence promoting – housing. Inadequate care for persons with mental health patients can cause moral distress for service providers and others (including service users). Moral distress refers to personal distress related to situations where the right thing to do is known, but it cannot be done due to social or other constraints. 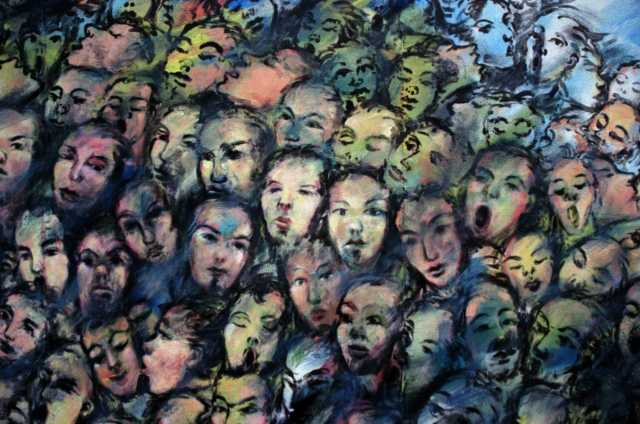 Mural on the en:Berlin Wall at the East Side Gallery (Spring 2002). Art by Chitrapa. Photo Credit: Peter Rimar, March 4, 2007
Image Description: Group of many heads with different facial expressions.

Medications such as anti-psychotics, anti-depressants, mood stabilizers and anxiolytics address various mental health symptoms or syndromes, such as hallucinations, depression and anxiety. When used judiciously, and in conjunction with other forms of mental health care, the usefulness of such medications is widely recognized. There is growing concern, however, about the safety and effectiveness of some of these medications. This explains the movement in long term care facilities to reduce the use of such medications. Yet in hospital settings, these medications are often used profusely, both regularly and on an as needed basis. Sometimes this results in high risk medication loads. Some service providers (including peer support workers) report moral distress from overuse of these medications.

Brain stimulation/modulation such as electroconvulsive therapy, transcranial magnetic stimulation and deep brain stimulation address various mental health symptoms/syndromes, such as catatonia, depression and obsessive compulsive disorder. Some of these treatments are fairly effective, easy to use and have minimal side effects, but some of them are not publicly funded across Canada, for example, transcranial magnetic stimulation. Service providers (including many psychiatrists) report moral distress from the lack of availability of such mental health care.

Psychotherapies such as cognitive behavioural therapy and interpersonal therapy are evidence-based. They may not only be effective but may also cause less harm than other types of mental health care such as medications and some brain stimulation/modulation such as electroconvulsive therapy for conditions such as mild to moderate major depression. With few exceptions, however, psychotherapy is mostly inaccessible to a large part of the Canadian population. This is because of Canada’s geographical size, the distribution of its population (particularly in remote Northern communities), and funding challenges. Ontario recently announced public funding for evidence-based psychotherapy, but this is focused on fairly mild forms of mental illness. And, internet-based psychotherapy could be a solution for remote areas, but broad band is not fully accessible across Canada. Many service providers (including referring physicians) report moral distress from the lack of access to evidence-based psychotherapy.

What can reasonably be done to address these various instances of moral distress? Addressing the root causes of moral distress, such as cultures of practice and economic constraints, is important and laudable but not likely to achieve considerable change in the short to medium term. Acceptable change in the short to medium term may include broadening the scope of ethics consultation and other support to reduce and prevent burnout of service providers and attempt creative solutions within current constraints. Evaluation of such change is needed to inform its broad implementation.

Abraham (Rami) Rudnick is a Professor in the Department of Psychiatry at Dalhousie University.