In August, the president of the Canadian Medical Association (CMA) called marijuana “bad medicine.” According to the CMA the practice of prescribing marijuana is bad medicine because there is limited available data to serve as a guideline for determining potential interactions, side-effects, proper dosage, and effectiveness. The absence of the pharmaceutical industry in the development of marijuana as a drug has been an issue for the CMA because conventional and rigorous research procedures have not been followed. More rigorous empirical research (e.g., clinical trials) would generate data that could provide missing information and determine which forms of the drug were most effective and safe (e.g., smoking, vaporization, edibles, patches, and so on). If we can set aside purely normative concerns and focus on setting clear, empirically-supported terms of debate, then it is more likely that we will arrive at a consensus that balances patient needs and broader public health concerns.

With such a sensitive and controversial subject, issue framing matters; and when the debate over medicinal marijuana is framed as a question of adequate research into the drug’s risks and rewards, the ethical concerns shift. The emergent core question becomes one of striking a balance between the potential risks to patients when prescribing marijuana versus potential rewards for them. The risks could include unwanted and unknown side-effects and drug interactions or diminished effectiveness due to ineffective dosage. The rewards might include safe, easy, effective, and inexpensive forms of prescription medicinal marijuana for the management of symptoms for a number of mental and physical illnesses, including cancer, HIV/AIDS, Crohn’s disease, multiple sclerosis, and depression. Indeed, when framed in terms of risks versus rewards, the question of whether or not medicinal marijuana should be permitted becomes an empirical one. 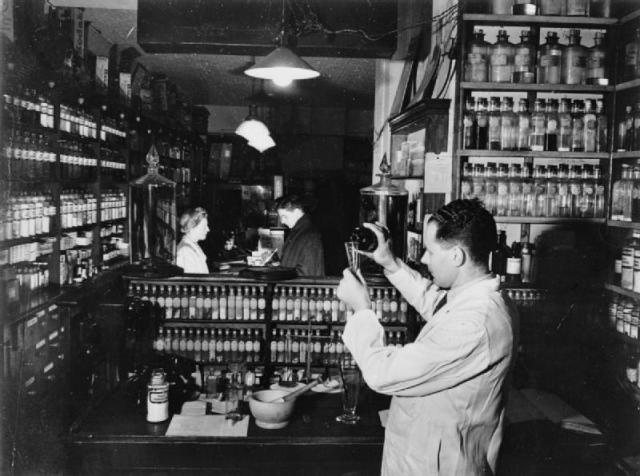 A chemist making up a doctor’s prescription from galenicals (viz., medicinal ingredients of organic, rather than chemical, origin), ca. 1943.

An empirical debate about medicinal marijuana would be solely data-focused, centering on questions of the effects of the drug on treating symptoms of illness — or perhaps even illnesses themselves — and at what dosage, as well as any potential harm that the drug may cause in its various forms (e.g., lung cancer, if smoked), including interactions with other substances.

Of course it’s not clear whether an empirical approach can be disaggregated from a purely normative one (e.g., marijuana is bad because it is a mind/body-altering substance; marijuana is good because it’s natural; marijuana should be legal because tobacco is). But these questions can be bracketed if we set aside the question “Should marijuana be legalized as medicine?” and replace it with “What would the effects of adopting marijuana as medicine be? ” The data generated could then be used to answer the question of whether or not marijuana is an appropriate drug that should be legally available.

Western medicine has a long history of privileging pharmaceutically manufactured drugs over natural alternatives, and marijuana has been associated with illicit drug use and a particular marginalized culture (think: stoners). Political campaigns against the legalization of marijuana have tended to focus on scaring citizens by suggesting that, should pot become widely available, a nation of perpetually half-baked do-nothings would emerge.

Meanwhile, proponents of medical marijuana often only cite anecdotal evidence that the drug is safe as medicine. For example, Dr. Mark Ware, a pain relief specialist, spoke to delegates at the CMA’s annual meeting and argued that existing studies on marijuana usage provide sufficient data for physicians to make educated prescriptions for their patients. This research suggests that the potential risks of using the drug medicinally is low. Although further research is needed, prescribing marijuana for medical use seems reasonable.

However, it seems that the CMA implicitly disagrees with Dr. Ware’s claim that there is enough data to proceed with prescribing marijuana for medicinal use. The implication of the CMA’s position, then, is not that the status of marijuana is inherently problematic. Instead, the issue rests on a lack of data. Accordingly, the debate around the subject in Canada should, if we accept the CMA’s terms, turn to focus on what counts as data, how much is required compared to how much we currently have, and what a reasonable level of risk-versus-reward might be.

Focusing on the empirical data concerning medicinal marijuana presents an opportunity to engage in a constructive, fact-based exchange free of moralizing or political intervention – from either opponents or proponents. In addition, an empirical approach opens up space for public health research on the social and political effects of the drug from an epidemiological perspective.

Ultimately, the CMA’s aversion to medicinal marijuana supports further research into both the personal and social benefits and costs of the marijuana as a drug. We ought to separate normative and empirical concerns about medicinal marijuana and engage in more constructive debate, focused on data-based arguments about risk-versus-reward.

Dave Moscrop is a PhD candidate in Political Science at the University of British Columbia and a Vanier Scholar. @David_Moscrop

Tags: Dave Moscrop, Medicinal Marijuana
Re-posting IE blogs: Impact Ethics permits non-commercial redistribution of commentaries, as long as the original commentary is passed along unchanged and in whole, with credit to the author and a link to the original Impact Ethics post. For commercial reprints, please contact the blog manager at impactEthics@mun.ca

← Left Out In The Cold: Seven Reasons Not To Freeze Your Eggs
After Plasma: Are Blood Stem Cells Next? →