It Is Extremely Unlikely that You Will Not Have a Recurrence

Adam Hayden, a philosopher, writer, speaker, and patient advocate, recalls the day that he and his wife received his diagnosis with a terminal brain cancer.

The neuro-specific team of occupational and physical therapists cleared my intensive therapy schedule for the day. Later, my wife, Whitney, and I would be face-to-face with our oncologist, and by extension, with brain cancer. Yet, with a nod toward the invisible shackles of a locked hospital unit, the permission to leave, if only for a long drive and a short visit with an oncologist, brought joy.

I laced up my gray Chuck Taylor’s, and I tucked in my shirt to suggest that I gave a damn. By then, the rehab hospital felt like home, and I was proud of my ability to turn my own wheels to move around the unit. We’d park me, in my wheelchair, near the station where nurses buzzed people in and out.

Whitney drew her iPhone and snapped a picture of me extending index and pinky fingers to flash the ubiquitous rock’n’roll horns, not to mention a large grin. What awaited us on the other side of those locked double doors was a diagnosis. This was the last photo taken of the Adam left behind. These two weeks after surgery were a slow shedding of my skin, a maturation, a developmental cycle, and I would emerge from my chrysalis as a terminal species. During the months leading up to diagnosis I studied philosophy of science as a healthy-on-paper, 32-year-old graduate student. The words written by philosopher Havi Carel rang true, “Illness throws the ill person into a state of anxiety and uncertainty. As such it can be viewed as a radical, even violent, philosophical motivation that can profoundly alter our outlook.” 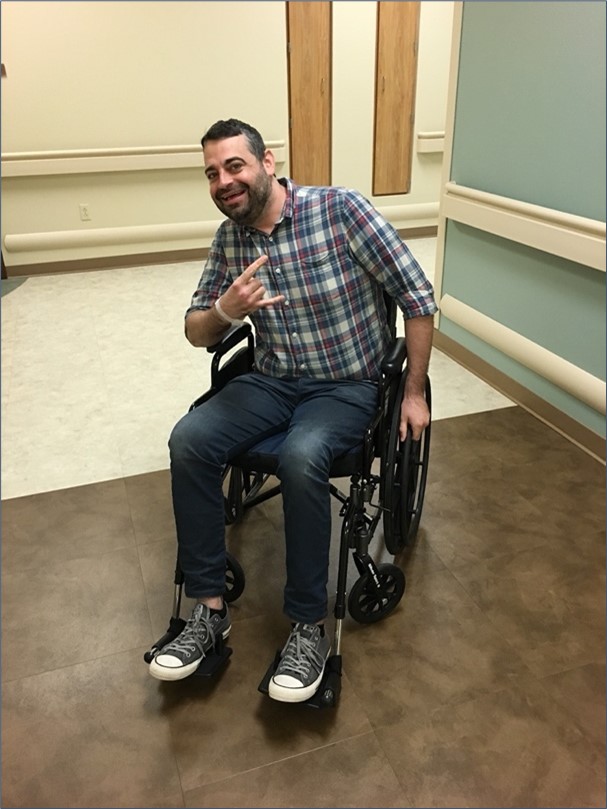 Exiting through the main lobby entrance of the rehabilitation hospital was surreal. The energy here was illuminated by sunlight and smiling faces. These non-neuro trauma patients were being thrown a rope to buoy them back to the surface. Many of us in the locked brain trauma unit, out of sight, up an elevator, and through the secure entrance, hoped at best to achieve some modified independence. For many of us we would never know life without a home health aide or an involved caregiver. We may never recover our personalities or express our thoughts through language. Our memories were archived in the file cabinets of our brains with lost keys that occasionally we’d pry open to give those who loved us hope, only to have the folders slip from our grasp and scatter onto the floor with confusion and anger. It was hard not to resent the happiness and hope of the main hospital patients who recovered from joint replacements and sports injuries.

As we neared the neuroscience building, we passed the hospital where I underwent an awake brain surgery and days later would be discharged to the rehab hospital to re-learn to walk, feed, bathe, and dress myself. The sight of the hospital returned memories of fear and trauma: the nurse who held my hand through surgery and the monitor that displayed my sinus rhythm, a digital lub-dub. I recall the surgeon’s firm grasp on my shoulder while my head was clamped to the operating table in three-point fixation, with screws and ratchets like an Ikea bookshelf. I recall the message that I relayed to Whitney an hour into my surgery. I recall my surgeon’s hands gently cradling and wrapping my skull to “close.”

We pull up to another circle drive, another entrance, and another grand atrium with pictures of old White men and plaques beside their portraits.

We navigate the maze-like hallways to find a small exam room. “You have many positive prognostic indicators,” my doctor began. These are words that each hold meaning by themselves, but the phrase means something altogether new and different when these familiar words are strung together. “It is extremely unlikely that you will not have a recurrence,” he continued.

This is a double negative, a sentence constructed to obfuscate, not with malice, but to layer grammar and mechanics on top of simple statements to shroud the sentence with enough uncertainty, to mask the sadness, even shame. Researchers first documented this disease more than one hundred years ago, and all we have to show for it are the same old standards of care: surgery, radiation, and chemotherapy.

In that moment, in that office, in gray chucks and heavy with dexamethasone weight, we were four days shy of four weeks after the stat MRI ordered by my general practitioner set all of this in motion.

“I regret to inform you that you have a brain tumor,” my general practitioner had said.

Now we know, it is the aggressive and incurable brain cancer, glioblastoma.

Adam Hayden is an independent scholar and research assistant for the Department of Philosophy, Indiana University Indianapolis. Read his personal blog: https://glioblastology.com/. @adamhayden.

Tags: Adam Hayden, Cancer, Motivational, Terminal brain cancer
Re-posting IE blogs: Impact Ethics permits non-commercial redistribution of commentaries, as long as the original commentary is passed along unchanged and in whole, with credit to the author and a link to the original Impact Ethics post. For commercial reprints, please contact the blog manager at impactEthics@mun.ca
← The coronavirus vaccines are here. Now what?
COVID-19 Vaccine Certification: A Contentious Proposal →