Florence Ashley critiques newly published research on rapid-onset gender dysphoria, arguing against the thesis that it evidences a new type of gender dysphoria for trans youth.

The study consisted of a 90-question survey placed on three websites used by parents to report the rapid-onset of gender dysphoria in their children. The survey included multiple-choice and open-ended questions. On the basis of 256 completed surveys, Littman concluded that rapid-onset gender dysphoria appears to represent “an entity that is distinct in etiology from the gender dysphoria observed in individuals who have previously been described as transgender,” describing patterns of increased internet usage and of degrading parent-child relationship and child mental wellbeing as “particularly concerning.”

There are several problems with this study that cast doubt on the validity of her inferences. 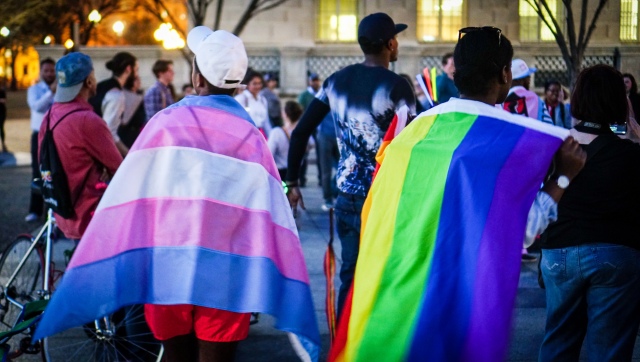 Dance Protest Celebrating Trans Youth, The White House, Washington, DC USA, see https://www.facebook.com/events/180832712405714/
Image description: youth gathered on street, facing away from the camera. Two youth are wearing flags on their backs. One flag is the Transgender Pride flag (striped blue, pink, and white), the other is the LGBT Pride flag (rainbow stripped).

A number of questionable assumptions are made in the study in order to support the claim of a new type of gender dysphoria—e.g. that being trans implies having gender dysphoria, or that asking to consult a gender clinic is tantamount to transitioning. There are also concerns with her framing of issues. For example, negative experiences of one or two parents are frequently detailed at length in the article and used to support her thesis, despite being anecdotal and unrepresentative of the whole sample.

Crucial to interpreting the study is acknowledging the unrepresentativeness and unreliability of the sample population. The survey recruited participants from three websites – 4thWaveNow, Transgender Trend, and Youth Trans Critical Professionals – well known for their longstanding hostility toward trans people. Lack of parental support of gender identity is one of the strongest determinants of suicidality among trans people. Since the sample largely disbelieved their children’s expressed gender identity and came from websites which actively discouraged acceptance of those gender identities by respecting new pronouns and names, the reported degradation in child mental health and parent-child relationship can be readily explained as a by-product of parental rejection of gender identity.

Three other statistics play a central role in generating the hypothesis of a new type of gender dysphoria: mental health issues prior to coming out, increased internet usage, and trans-dominated peer groups.

However, these statistics aren’t surprising. Depression, anxiety, and self-harm are all unfortunately common among trans teenagers, and other mental health issues are also over-represented in trans people, albeit at a lower rate.

Increases in internet usage and consultation of trans content is to be expected among teenagers questioning their gender identity. A general increase in internet usage is also common among teenagers, especially those who feel they don’t “fit in.” The trans content consulted also appears fairly normal, despite worrisome framing. For instance, 29.1% of teens in Littman’s study were told “that if they waited to transition they would regret it,” which means that 70.1% of them were not known to have been told that they would regret delaying transitioning a single time. Of course, one wonders how the parents were privy to that information in the first place. It’s not known how many times that 29.1% was told, whether alternative narratives were provided, or whether the advice was tailored to the teen’s specific situation. All-in-all, however, being told that they would regret delaying transition doesn’t appear a cause for concern.

Trans friend groups aren’t surprising either. Gender-questioning people are frequently attracted to trans-friendly friend groups and student groups, such as Gay-Straight Alliances and theatre groups. And, to quote Tumblr user leonqueerwata, “you do realize that we all tend to flock together like penguins huddling for warmth in a cold, heteronormative world, right?”

Florence Ashley is a master’s candidate in law and bioethics at McGill University. @ButNotTheCity