In March 2016, The World Health Organization terminated its public health emergency warning for Ebola. We can now reflect upon this epidemic with particular attention to the ways in which we could improve our response to future public health crises.

From 2014-2016 West Africa experienced the largest outbreak of Ebola in history. There were over 28,000 cases of Ebola, and 11,325 people left dead. Many governmental and non-governmental organizations responded to this public health emergency. As well, the international military community provided a significant amount of logistical support in West Africa.

Numerous ethical challenges were faced by those who responded to the Ebola epidemic. Among the most complex challenges were those related to quarantine policies. Due to the novel and deadly nature of the virus, many people (including patients, healthcare workers, and logistic support workers) were quarantined for periods of time throughout the epidemic. Policies concerning quarantine varied from place to place. In some cases, exposed individuals were under mandatory ‘self-quarantine,’ and in other cases, large groups of low-risk and unexposed people were quarantined. 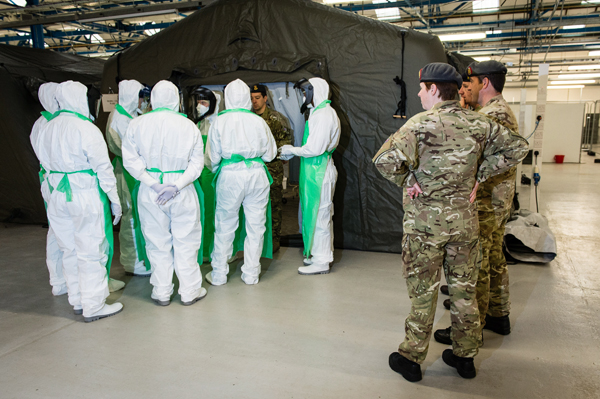 In the United States, in a civilian context, the forced quarantine of returning health care workers met with criticism and condemnation. Many argued that public health interventions should not overtly infringe on personal freedom without adequate justification. In the case of Ebola, the mode of infection was known, as were the signs, symptoms and incubation period. Public health professionals determined that active-direct monitoring was sufficient. As a result, mandatory quarantine policies were abandoned.

In the military context, the debate concerning mandatory quarantine of the large cohorts returning from West African response missions received minimal attention. In fact, in the United States, there was little debate about this in the lay or academic press.

As troops returned home from West Africa, United States Defense Secretary Chuck Hagel announced a mandatory 21-day ‘controlled monitoring policy’ for all service members who had participated in Ebola response missions. As a result of this policy, hundreds of service members were ordered to mandatory quarantine camps across Europe and the United States. This quarantine program was a significant (and surprising) departure from the national and international guidance on Ebola precautions. Members of the American military population represented low-risk or zero-risk to the general population as they had only participated in logistical support missions. Unlike civilian health care workers (who were not subject to mandatory quarantine), they did not have contact with infected patients and thus did not require this level of monitoring.

The explanation for this unprecedented level of caution and the stark difference between civilian and military policies was informed by differences between civilian and military populations. Whereas civilian aid workers were deployed to Ebola-affected areas by choice, United States Armed Forces service members were deployed by orders. Within the United States, there is an expectation that the military is different and that they have no (or very limited) autonomy.

The approach taken by the Canadian Armed Forces was somewhat different and less ethically challenging. The Canadian Armed Forces relied on the Public Health Agency of Canada’s guidelines for risk assessment and used a risk stratification matrix. People considered low-risk or zero-risk were permitted to return home or could choose to self-quarantine. However, mandatory quarantine accommodation was organized for asymptomatic, high-risk travelers during follow-up periods. Although no high-risk service members were ever identified and sent to quarantine, mandatory quarantine did exist. In this way, military policies in both Canada and the United States differed from civilian policies in ways that are directly related to personal freedom.

Within the military, service members have relinquished a number of personal freedoms. Men and women in the military are told how to dress, how to style/cut their hair, and where to live and travel, among many other things. These are not suggestions but orders. Following orders is foundational to the cohesion of the military hierarchical structure, and this is one of the reasons that members of this population can be sent to mandatory quarantine just as they can be sent virtually anywhere. This population would not be vocally critical of unnecessary quarantine. Instead, they would follow the orders of their command. And yet, there is good reason for us to be critical of mandatory quarantine that infringes on personal freedom without adequate justification.

The limited autonomy and restricted personal freedom of military service members are important ethical considerations with regard to liberty-limiting public health interventions. If the mandatory quarantine of civilians is ethically problematic, then we must remember to broaden our critique to military programs that affect uniformed men and women.

Sheena M. Eagan Chamberlin is a Lecturer in the Department of Nursing & Health Sciences at California State University East Bay.

Tags: ebola, military, public health emergency, quarantine, Sheena M. Eagan Chamberlin
Re-posting IE blogs: Impact Ethics permits non-commercial redistribution of commentaries, as long as the original commentary is passed along unchanged and in whole, with credit to the author and a link to the original Impact Ethics post. For commercial reprints, please contact the blog manager at impactEthics@mun.ca
← ‘Help’ Seems to be the Hardest Word
Ethics at CIHR: Moving Forward →