Wrinkles – Fear of Alzheimer’s and Aging

Timothy M. Krahn and Walter Glannon reflect on the graphic novel Wrinkles and what it teaches us about fears of Alzheimer’s and aging.

Alzheimer’s disease, the most common form of dementia, has become the most feared disease—more so than stroke, heart disease, or even cancer. The fears associated with Alzheimer’s are a complicated mix of medical, social, familial, and personal factors.

For example, we fear that we will lose our autonomy under the threat of disease and aging with subsequent vulnerability to social neglect and exclusion. We worry that we may not be cared for when we are elderly and become less capable. We are afraid of having to confront questions about dying and death.

These fears are incredibly daunting. When one of us (Krahn) was an impressionable youth, a very intelligent, middle-aged professor said: “If ever I end up like that [meaning demented] just throw me over a cliff.” This sort of statement is not uncommon among persons who fear dementia. But it’s likely that far fewer persons who say something like this would actually deal with their fear through some form of assisted suicide. The more problematic interpretation of the professor’s statement is his perception that such a life is necessarily a burden to oneself and others.

These days researchers are challenging some of the fears and stereotypes by moving “beyond the individual level and focus[ing] on the importance of strengthening communities.” They are “attun[ing] us to the fact that people with dementia (or other significant cognitive or physical impairments), given the right social and community supports, are capable of resilience and can continue to live meaningful lives and maintain a sense of personhood.” This is not to deny the hard realities that many who face Alzheimer’s and other dementias will eventually need nursing home care, which, as a permanent placement, is seen by many as a fate “worse than death.” But research is helping us to understand, and aim for, quality of life in nursing homes instead of presuming that living in one “is de facto a dependent and devalued form of life.” As Rosemary Kane explains, “long term care is a subject that should be capable of engaging the imagination positively. For many people, long term care decisions dictate the last chapter of their biographies—the chapter that should make sense of the story.” 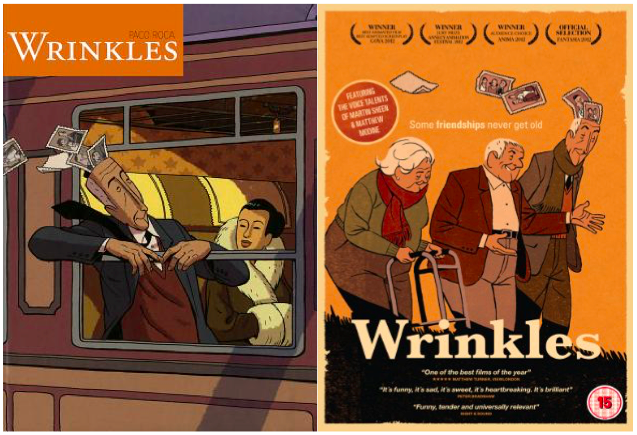 Sometimes fear stops us from thinking imaginatively. In Wrinkles—a Spanish graphic novel available in English translation, now also available as an animated film—author Paco Roca “underlines, circles, highlights, and writes in the margins” of our fears about Alzheimer’s, dementia and aging. This is the story of Ernest, a proud banker whose son and daughter-in-law no longer feel capable of caring for him at their home. Reluctantly, they admit him to an assisted care facility for residents at different stages and with varying degrees of dementia. Ernest has a diagnosis of Alzheimer’s. But this information is not made known to him—a very common problem for patients—until a chance mix-up of medications leads to a consult with a staff doctor. The doctor reveals to Ernest his diagnosis and the gravity of his prognosis. With the assistance of his roommate and developing friend Émile, Ernest takes up further reading and mental exercises to try to convince the staff—and perhaps himself—that he can thwart the progress of dementia and so avoid his (and his fellow residents’) ultimate fear of being transferred to the upper floor. The upper floor is where “the faint howls of those with advanced dementia echo from an unwanted future.”

the residence has two floors: that of the able-bodied, ours, and the upstairs floor is where you find the helpless. Those who can’t manage on their own anymore finish up there… Those who have lost their minds. Dementia, Schizophrenia, Alzheimer’s… Better to die than to end up there.

This captures Ernest and Émile’s fear of ending on the “the helpless cases floor” – complete loss of autonomy, isolation, no sense of belonging, and ultimately forgotten.

Wrinkles, arguably, is short on hope and it doesn’t always avoid negative stereotypes about aging. All the same, we think it may be seen as an imaginative project attempting to pull in younger audiences with an overall goal to replace feelings of resentment with empathy towards older people.

The conditions for resentment across the generations are fertile in our society. At present, in high-income countries, birth rates are down and the proportion of the population living with dementia is dramatically increasing. This means a shrinking tax base coupled with a growing need for more extended care resources devoted to those who are living longer and with dementia. In publicity notes and interviews Roca explains that he was motivated to create the novel and film in response to the fact that while “[w]e can empathize with a Roman emperor or a psychopath, … there are so few times that we can empathize with an older person.” He further explains that “… my own parents are old and have health problems…. I wanted to understand how they experience growing old in a society that makes elderly people invisible.”

In making life inside a nursing home visible, Wrinkles showcases hope and expectation for seniors to continue to live in environments that are stimulating, social, caring, and secure right up until the end. This is so even if that end should include Alzheimer’s or another kind of dementia. This should be a point of public recognition and widespread empathy, not of public fear and neglect.

Timothy M. Krahn is a Research Associate at Novel Tech Ethics in the Faculty of Medicine at Dalhousie University.
Walter Glannon is a Professor in the Department of Philosophy at University of Calgary.

← Home Sweet Broken Home
Wrinkles and the Paradox of Aging →