Gene Editing: How much justice delayed or denied?

I want to pick up on one very small piece of this immense puzzle, highlighted by philosopher John Harris in the penultimate session of day one of the Summit (you can find his talk here). Harris, at the University of Manchester, highlighted three allegedly “obviously fallacious and dogmatic” arguments against the editing of the human genome:

I want to pick up the second of these, and concentrate solely on the question of editing the human genome in embryos, which is Harris’ main talking point. Harris notes that the risks of gene editing of the germ line only have to be comparable to the “gold standard” of human reproduction. As such, Harris wants us to conclude, we should press forward with gene editing insofar as it is no more risky than our alternatives, including the risks posed by already accepted reproductive technologies (IVF, preimplantation genetic diagnosis (PGD), etc.). 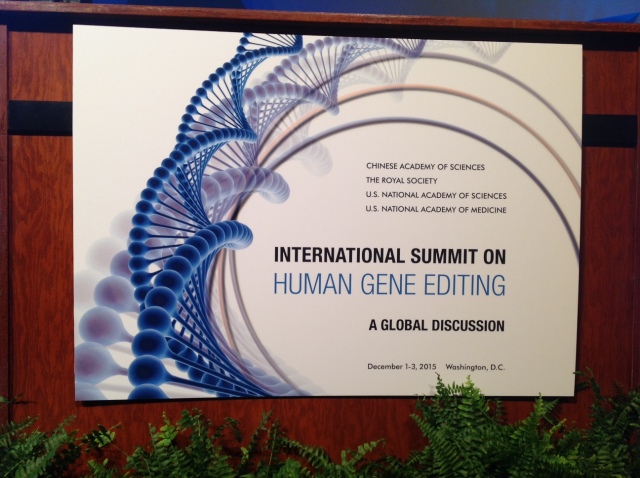 The problem is that Harris’ argument is incomplete, because the argument he purports to debunk is itself incomplete. While some surely think that the risks of human gene editing are unacceptable independent of any potential benefits (a strong “precautionary principle,” which Harris—unfairly, I think—dismisses outright), most arguments turn on the risks we can expect from a technology, weighed against its benefits.

Framed this way, Harris’ argument stumbles. The common answer to “what are the benefits of gene editing?” is “we’ll cure genetic diseases and save lives!” When this claim is interrogated, however, it isn’t clear how many lives we’re talking about. This ought to matter to Harris, whose argument, at least at the Summit, relied on the prospect of many people being saved, and where gene editing was necessary to the survival of those people. (I set aside Harris’ transhumanist claims for the sake of brevity.)

Yet the final session on day one of the Summit was an exercise in uncertainty: hundreds, or even thousands, of separate genes inform most common diseases with genetic components. Changing all of these is unlikely to be practical or safe, and would not so much “cure” a person, but rather lower their risk of getting that disease. For genetic diseases like Huntington’s disease that are autosomal dominant, where the presence of a single particular gene in a non sex-linked chromosome will cause the disease, there’s little reason why our first line intervention wouldn’t be Preimplantation Genetic Diagnosis, where we select an embryo that doesn’t have the gene for that disease. For couples where one partner has two dominant genes for a disease—and thus 100% chance of passing on that gene, and the disease, to their progeny—gene editing would be a net benefit. The problem is that this scenario is incredibly rare: Eric Lander, speaking in the final session of day one of the Summit, noted that only about a dozen such cases of Huntington’s have been recorded.

Gene editing is important and beneficial; there are people out there whose lives, and whose children’s lives, will be made better with this technology. But Harris’ claims about the benefits of gene editing have to be moderated. Again, this should matter to Harris: if he wants to say, regarding a moratorium on gene editing humans, that “justice delayed is justice denied,” he has to point to the injustice. For a wide range of diseases, this injustice could be rectified with other approaches, such as increasing access to genetic screening of parents (and genetic counselors), and Preimplantation Genetic Diagnosis—gene editing doesn’t have to play a part. Some will go without, but this number is surely no larger than in diseases that are neglected by funding agencies—if anything, caution about the benefits and harms of technology seems a good reason to delay, rather than mere neglect of a disease.

And here, Harris has to answer the thornier question of why we ought to invest in this technology for comparably limited clinical benefit, compared to, say, any one of a range of neglected tropical diseases whose mortality far outstrips genetic diseases. If the number of lives saved is Harris’ primary metric, his enthusiasm for gene editing doesn’t appear to be proportionate to the expected benefits of the technology. A mere appeal to lives saved doesn’t get him the traction he wants.

Nicholas G. Evans is a Postdoctoral Fellow in Advanced Biomedical Ethics in the Department of Medical Ethics and Health Policy at the University of Pennsylvania @neva9257

Tags: CRISPR, disability, Gene editing, IVF, John Harris, Nicholas G. Evans, risks to future generations
Re-posting IE blogs: Impact Ethics permits non-commercial redistribution of commentaries, as long as the original commentary is passed along unchanged and in whole, with credit to the author and a link to the original Impact Ethics post. For commercial reprints, please contact the blog manager at impactEthics@mun.ca

← One of a “Planned” Generation
The Human Germline Genome Editing Debate →