Electronic Cigarettes: Should We “Tar” Them With Same Brush As Regular Cigarettes?

Encountering my first electronic or e-cigarette, I initially mistook it for an asthmatic inhaler. But the prominent cloud of smoke-like vapour was harder to mistake (see video), as was the futuristic-looking metal barrel – like something from Battlestar Galactica. I was, at the time, indoors at a Nova Scotia gym, adjacent to the children’s day-care area. Oxygen there is highly valued. Smoking outside is perfectly legal, but a gauntlet no-one ever seems to run. After several withering glances, the youthful offender desisted. Later, I wondered, though: had we been unfair?

In Nova Scotia, traditionally a smokers’ stronghold, e-cigarette ‘vaping’ arrived only a few years ago. This involves battery-powered vaporizing (rather than burning) of a nicotine solution flavoured like mint, chocolate, bubblegum or fruit. Seemingly, a breath mint and cigarette, all in one! Anecdotal user testimony (see comments) suggests genuine benefits for those unable to quit using nicotine patches, gum and steely will-power. E-cigarettes triumph by offering a nicotine fix in a soothingly cigarette-like form, with better flavour, cost, and control over (i.e., lowering or eliminating) the nicotine dose. Even non-quitters have noticed improved cough symptoms, cardiopulmonary function, and sense of smell. As well, indoor second-hand ‘smoke’ residues are lower. Like a heroin needle exchange, e-cigarettes seem an excellent harm reduction approach and quitting aid for hardcore smokers and their families. 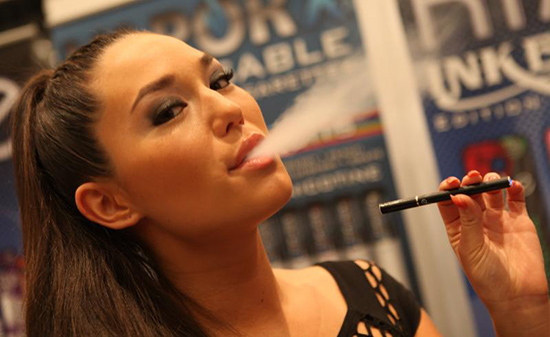 Currently, Health Canada has done little in terms of regulation. It states that e-cigarettes can only legally be imported and sold in Canada if they are “without nicotine” and “without health claims” (e.g., that e-cigarettes are safer than regular cigarettes, help in quitting, contain vitamins, etc.). In reality, any restriction is illusory, because e-cigarettes are refillable by design. Thus e-cigarette devices purchased with legal, nicotine-free solution can be—and are—refilled with nicotine-containing vials purchased separately online or in vapour shops. Health Canada has urged vendors to cease “importing, advertising or selling” e-cigarette products, but enforcement is seemingly absent.

Following US court decisions, Food and Drug Administration (FDA) regulation over e-cigarettes as “drug delivery devices” had been stymied, but in a development in late April, the FDA announced new regulations that will regulate e-cigarettes as “tobacco products,” like cigarettes. As such, e-cigarettes will now require addiction warnings, stricter manufacturing standards, and FDA approval of any health claims. Sales—including internet sales—to minors will be prohibited. While US courts do not bind Canada, given frequent harmonization of Health Canada and FDA policies, Health Canada may have been waiting for the FDA’s new approach. It will be interesting to see if Canada follows suit.

Concern about e-cigarettes rests on three main pillars: toxicity issues, partially overlapping quality control concerns, and social harms. First, nicotine in e-cigarette liquid activates brain receptors, is rapidly absorbed, and can be extremely toxic at high doses. A tablespoon of e-cigarette solution (at 7-10% concentration)—far less than one refill vial—can kill an adult. Notably, US CDC poison control centres have logged a 300% escalation in e-cigarette poisonings since 2012. Many of these poisonings are in children drawn to the candy-like smell, flavours and colours. Other poisonings are in adults who spill the liquid on their skin. Also, while second-hand emissions are considerably reduced, 20% levels of the same carcinogens and toxins as regular cigarettes are still puffed out—acetic acid, acetaldehyde, formaldehyde, acetone, isoprene—suggesting it is inconsiderate to vape inside your local gym or daycare.

Admonishing adults to guard against toxicity risks like spillage, poisoning or second-hand emissions is fine if they know of these risks. However, reports suggest many have only learned of e-cigarette risks when there were symptoms of poisoning. While users seem to have received the message loudly and clearly that e-cigarettes may be healthier than smoking, the associated toxicity risks do not seem to have been communicated as effectively by all sellers.

Moreover, a lack of quality control results in easily-broken vials, no toxicity warning labels and no child-proof caps. Given non-standardized manufacturing in places like China, and possible unhygienic storage in Canada, various ‘extras’ may be present in the liquid. For example, the carcinogen nitrosamine and the toxin diethylene glycol have been found in the liquid, posing user risks.

Finally, public health officials fear e-cigarettes will promote nicotine addiction. This could be a gateway to “re-normalizing” the social harms of cigarette smoking for a new generation. To teens, e-cigarettes offer cheap, cool-looking, adult sophistication in candy flavours, without the ID card needed for regular cigarettes. Since the 1990s, Nova Scotia tobacco use fell from 33% to 18%. Concerns are that the visible lack of legal restriction on vaping where regular cigarettes are verboten could encourage a smoking resurgence.

Nova Scotia may soon lead the nation with legislation limiting e-cigarette use in public places. Given the above concerns, I support this move, in addition to enhanced regulation by Health Canada. Yet questions remain regarding how best to limit e-cigarettes harms for minors. Reports indicate a recent drop in US teen cigarette smoking is associated with increased marijuana smoking. At a time when pot enjoys wide toleration and cigarettes are less accessible to teens, I suspect a causal link. Are conditions likely to differ here in Canada? If the link is causal, regulating youth access to e-cigarettes too strictly could do more harm than good. Teens may turn to more accessible, equally health-damaging pot, and those smoking cigarettes would be denied an effective quitting aid.

E-cigarettes urgently warrant better regulation than the present system provides. The challenge is to find an appropriate balance between over-restriction and turning a blind eye.

Jacquelyn Shaw is a researcher/writer and NTE alumna with graduate training in both law and medical science.

Tags: drug delivery device, e-cigarette, electronic cigarette, Jacquelyn Shaw, nicotine, second-hand smoke
Re-posting IE blogs: Impact Ethics permits non-commercial redistribution of commentaries, as long as the original commentary is passed along unchanged and in whole, with credit to the author and a link to the original Impact Ethics post. For commercial reprints, please contact the blog manager at impactEthics@mun.ca