Francine Coeytux, Marcy Darnovsky, Susan Berke Fogel, and Emily Galpern maintain that the development of new regulations about assisted reproductive technologies must include the voices of scholars who have studied women’s health issues, and advocates who have worked for policies and practices that safeguard women’s health and rights.

For more than a decade, Canadian regulation has explicitly countered commercialization of reproduction, prohibiting payment for surrogacy, sperm, or eggs as part of the Assisted Human Reproduction (AHR) Act of 2004. These policies are grounded in the view that preventing a market trading in reproduction as “goods and services” is fundamental to safeguarding the health, safety, and rights of gamete donors and surrogates.

Currently, Health Canada is in the process of developing additional regulations that were required but never created under the AHR Act. The department has published a consultation document to solicit input to the process. A number of Canadian women’s health scholars and advocates have submitted responses based on decades of involvement with assisted reproduction policy, women’s health research, and bioethics deliberations.

As the coordinators of an international Working Group committed to promoting public policies on assisted reproductive technologies (ART) that are consistent with social and reproductive justice, we have followed Canada’s policy process on assisted reproduction with great interest. We applaud Canada’s history of standing against reproductive commercialization and urge continued commitment to this position. In particular, we encourage Health Canada to incorporate the vital recommendations submitted by women’s health scholars and advocates, which centralize the safety, well-being, and interests of gamete donors and surrogates. 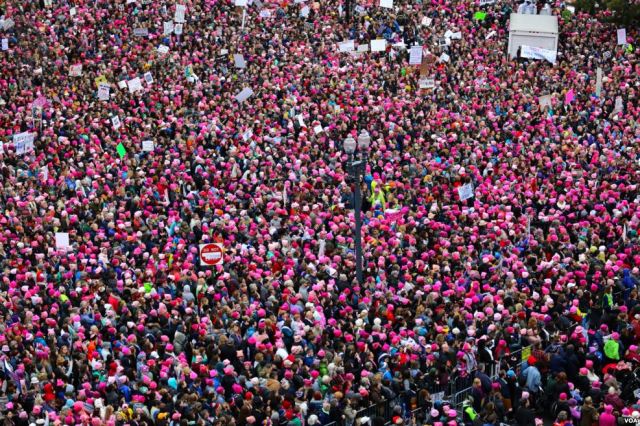 Image Description: Areal view of the Women’s March in Washington D.C. (2017). Image shows a large crowed on the streets, many of whom are wearing pink hats. Photo Credit: Brian Allen.

In contrast to Canada’s history of non-commercialization of reproduction, the United States—where the four of us live and work—has a heavily commercialized ART environment. High payments to surrogates and egg donors with certain traits reinforce the commodification of women’s bodies and their eggs and wombs as “parts” and “services.” Marketing reproduction creates an environment focused on goods and services rather than on the health and safety of women who are hired to be surrogates or to provide eggs.

Despite growth in the ART industry worldwide over the last 40 years, very little research or regulation is focused on the women who make in vitro fertilization and surrogacy possible. Egg providers are routinely told that the retrieval procedures are safe, although there is a dearth of studies internationally on their long-term health consequences. Groups like We Are Egg Donors provide a forum for donors to share their stories, and have collected anecdotal reports of many women who experienced moderate to severe problems after undergoing egg retrieval, often related to the hormones taken as part of the ovarian stimulation process. Documentaries and increasing media coverage of commercial surrogacy illustrate the complexities of a surrogate’s relationship with intended parents, and the barriers surrogates face to being in charge of their own health and bodies during their “contracted” pregnancy.

Health Canada’s current consultation process poses an important opportunity for the government to uphold the principles articulated in the AHR Act’s preamble, namely non-commercialization, human rights, dignity, and recognition that women are more directly and significantly impacted by ART than men. The comments submitted by Canadian women’s health scholars and advocates articulate what is needed to develop regulations that reflect these commitments. They highlight the importance of continued non-commercialization of human reproduction; consideration of gamete donors and surrogates rather than a sole focus on intended parents and children born from the technologies; and the need to clarify proposals regarding the reimbursement of expenditures by gamete donors and surrogates. They assert that a more substantive engagement process—one which includes the input of surrogates and gamete donors, as well as people with disabilities who might be affected by changes to donor screening proposed by Health Canada—would lead to legitimate regulations addressing the interests of all those involved in assisted reproduction.

Scientists and clinicians have important information and perspectives to contribute to the development of the new AHR Act regulations. However, their voices are often considered definitive and given far more weight by government agencies than input from civil society groups. Moreover, many researchers and health professionals are oriented only toward the interests of intended parents, and define “success” solely as the birth of babies. In this environment, there is minimal attention to the health, well-being, and safety of egg donors and surrogates.

The development of any regulations in this field must include the viewpoints of scholars who have studied women’s health issues, and advocates who have worked for policies and practices that safeguard women’s health and rights. As advocates who have worked for decades toward these same goals, we urge Health Canada to incorporate their recommendations into the new AHR Act regulations. This is a vital move for the health and well-being of the women and men who make possible family formation through ART.

Francine Coeytaux is the Co-Director, Pro-Choice Alliance for Responsible Research

Marcy Darnovsky is the Executive Director, Center for Genetics and Society

Emily Galpern, is a  Consultant, Center for Genetics and Society

This commentary was originally published on the IJFAB Blog.