About Us, Without Us: Inclusion in the Threat of Eradication

Teresa Blankmeyer Burke argues for inclusion and communication accessibility in bioethics discussions that threaten to harm the signing Deaf community.

The development of CRISPR, a cut-and-paste gene editing technology, has pushed discussions of germline gene “therapy” from speculation about how this might affect us sometime in the future to urgency, leading to the International Summit on Human Gene Editing held this week in Washington DC.

Germline modification of the human genome goes a step beyond what most people think of as genetic therapy, which alters the genome of one individual, to altering the genetic material of that individual and all of that individual’s descendants. If you happen to belong to a community, as I do, that has at its core a group of people with a cluster of genetic variants that contribute to the very nature and existence of said community, this could mean the eradication of a particular population and social community. 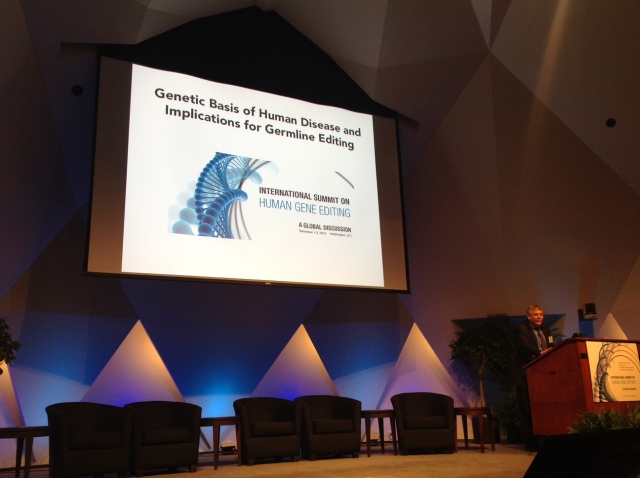 I’m speaking of signing Deaf communities, which have developed visual-tactile languages in response to the embodiment of deafness. Signed languages have persisted (despite numerous attempts to extinguish them) in large part because of native use by multi-generational deaf families who have passed this knowledge on to other deaf people not born into this linguistic community.

If the causes of multi-generational deafness are eradicated through techniques like CRISPR, what becomes of the signing deaf community? Is there a social obligation to consider the number of people who would have been born deaf and the impact of their absence on these communities? Do signed language communities become a quaint, exotic artifact, existing by the sheer will of linguistic hobbyists and a few members who, for whatever reason, cannot acquire species-typical hearing through biomedical intervention?

Two narratives that have dominated deaf education pit assimilation (living mostly in a hearing world by learning to speak and speechread) against separatism (residing mostly in a community of signers). These narratives are outmoded and incorrect: outmoded, because there are many deaf people today who move between signed and spoken language communities with ease; incorrect, because they wrongly borrow assumptions from other kinds of communities that don’t apply here.

The prevailing “assimilationist” view assumes that joining the mainstream will provide one with more access to resources and opportunities. This doesn’t work when one has only partial access to the language in which these opportunities and resources are conveyed. Technological solutions to integrating deaf people are likewise insufficient—even the most successful cochlear implant user still functions as a hard of hearing person in some settings, such as those where thee is considerable background noise.

For many, the “separatist” solution entails segregation and exclusion: deaf people are given limited choices and opportunities because we cannot hear. This is often a matter of social constraint, not audiological status. While the experience of being present in the mainstream with an interpreter does give one entree into the larger community, it comes with the social cost of having all communication mediated and controlled by another person. In contrast, all signing environments give the deaf person complete autonomy over her communication decisions and allow her to fully participate as a member of a community.

What gets overlooked is the issue of human flourishing. What should be asked is whether the experience of being a full-fledged member of the signing Deaf community constitutes a kind of human flourishing that ought to continue to be a way of life for deaf people.

A critical component of the ability to flourish is access to language, and for members of the Deaf community this means access through a fully accessible signed language. Partial access to spoken language requires one to fill in communication gaps and expend considerable cognitive load deciphering those gaps. While this can still yield a flourishing life, it is not the only way for deaf people to have flourishing lives. Discarding the option of flourishing in a world where one is guaranteed full, not partial, access to language, is an incalculable loss.

Full access to a language ought to be a right for all persons possessing the capacity for language. But one can only have full access to a language if there is a thriving language community and this means ensuring the conditions that make this possible. If the people who use the language disappear, not by social attrition, but through biomedical campaigns predicated on the assumption that it is a harm to be deaf, so does this option for human flourishing.

In circling back to discussions about human gene-editing and the threat that this poses to the sustainability of signing deaf communities, the great irony is that, despite the laws regarding access for people with disabilities, we are still excluded from conversations that involve the survival of our communities because those who organize these discussions (such as the organizers of the International Summit on Human Gene Editing) do not make them accessible.

If there are discussions that affect the potential survival of a community, shouldn’t members of that community be included? Considerations of inclusion should be part of the initial planning stage when there is a public component, such as a live stream on the internet, not an afterthought. After all, who better to speak to the value of a community than those of us who inhabit it? But it is hard to participate when you don’t have access to what is being said.

Addendum: the International Summit on Human Gene Editing did respond promptly (in less than 24 hours) to the request to provide captioning for the public internet stream. While I appreciate these efforts very much, this should have been part of the program from the beginning.

Teresa Blankmeyer Burke is Associate Professor of Philosophy at Gallaudet University, and Visiting Scholar at the University of New Mexico Department of Linguistics (2015-16). @teresaburke

Tags: CRISPR, International Summit on Human Gene Editing, Theresa Blankmeyer Burke
Re-posting IE blogs: Impact Ethics permits non-commercial redistribution of commentaries, as long as the original commentary is passed along unchanged and in whole, with credit to the author and a link to the original Impact Ethics post. For commercial reprints, please contact the blog manager at impactEthics@mun.ca